Bulgarian Oldschool Death Metal band DAY OF EXECUTION revealed the first track from their upcoming album “Inevitable End”. The song is named „The Beast of War“. More information about the content and the release coming soon.

The cover artwork is done by Nikola Kaloferov again.

The debut album of Bulgarian Thrash Metal band TERRAVORE is streamed via “New Wave of Thrash Metal” YouTube channel. For this momend the edition is in digital format, in the beginning of 2018 it will be out on physical media (CD and MC) by Stormspell Records and Heathen Tribes. The release content 9 tracks with total time 45 minutes. They are recorded, mixed and mastered in PlayGround Studio in Varna, Bulgaria, with Marin Marinov, Atanas Machev, Todor Voynski  (members of ABADDON) and TERRAVORE. 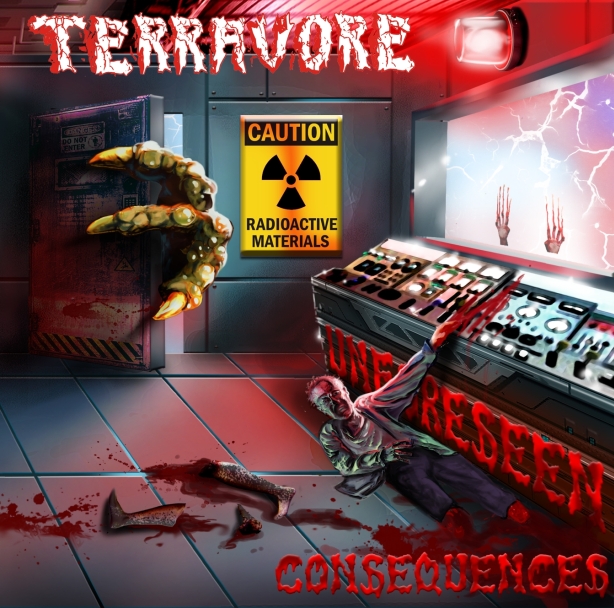 Cover artwork is done by Anton Atanasov (Old School Crew), by idea of Kalin Bachvarov. The album is streamed in Bandcamp, but everybody can buy it in digital format.

With the release of TAAKE’s “Kong Vinter” less than three weeks away, Dark Essence Records have today debuted a track “Inntrenger” from what will be the seventh full-length album from one of Norway’s Black Metal elite.

Nestled within the looming embrace of seven mountains, the rugged, rain-swept coastline of Bjoergvin has spawned many extreme bands and musicians over the years, but none quite as iconic as TAAKE and its formidable founder Hoest, who is now back with a seventh full-length album. Titled “Kong Vinter” (King Winter), the album is set for release on Dark Essence Records on the 24th November in Digipak CD, Digital and Vinyl formats, with the Vinyl available in black, transparent and white versions. All are double, 180 gram LPs in a gatefold cover. Transparent and white are limited to 1000 each.

Over the years Hoest has steered his creation with unerring accuracy through the mire of Black Metal. He has avoided the pitfalls of either stagnation or over-experimentation, and remained true to the spirit of the traditional Black Metal genre, whilst at the same time breathing fresh life into it.

True to form Hoest has spent three years working on “Kong Vinter”, ensuring that the album is imbued with the unique Taake sound, whilst at the same time taking it even further. It is deceptively familiar to the ear, yet it is unpredictable as it winds its way sinuously through a soundscape that only a mother could love. A soundscape underscored by a nasty groove, that at times can seem devilishly playful.

The result is an album that is both progressive and straight forward, with a touch of the devil’s own music – Rock’n’Roll, making it unmistakably TAAKE. It is, in fact, an illustration as to why, for over two decades, Hoest has succeeded in remaining relevant and at the forefront of the genre.

“Kong Vinter”, on which Hoest plays all the instruments himself, was recorded and produced by Bjornar Nilsen (VULTURE INDUSTRIES) at his Conclave and Earshot Studios in Bergen. With a running time of 55 minutes and album artwork by Tom Korsvold of Coverart, track listing is as follows:

Metalmania, the biggest indoor Metal festival in Eastern Europe returns to Spodek Hall (Katowice, Poland) on 7th April 2018. The 24th edition of this iconic festival will be headlined by EMPEROR!

Official poster of the festival was created by Zbigniew M. Bielak, one of the most respected contemporary artists on the stage, visionary graphic artist and illustrator, an artist who in recent years has revolutionized the approach to the art graphics on the metal scene. Bielak is the author of cover artworks for albums of such metal bands as GHOST, WATAIN, VADER or PARADISE LOST to name a few.

Metalmania Festival, one of the most important musical events of 2018, a real treat for metal maniacs! One day, two stages, several bands from all around the world and thousands of fans! That’s what Metalmania Festival is all about!

The last edition of Metalmania Festival took place at Spodek Hall in Katowice on April, 22nd 2017, with SAMAEL, CORONER, MOONSPELL and SODOM on the bill! Tickets are on sale now: www.ticketpro.pl, www.eventim.pl, www.ebilet.pl, www.biletin.pl, www.ticketportal.pl.

The line-up of the annual extreme music indoor festival Eindhoven Metal Meeting is now completed with the addition of the Swedish Melodic Death metallers DARK TRANQUILLITY on the billing. The Swedes are flying in exclusively for the event, replacing MY DYING BRIDE (UK) who had to cancel all of their planned live shows in 2017.

This year the festival taking place in Eindhoven, Netherlands will have it’s ninth edition. The event will be again hosted by the recently renowned venue Effenaar on Friday 15 & Saturday 16th of December 2017. 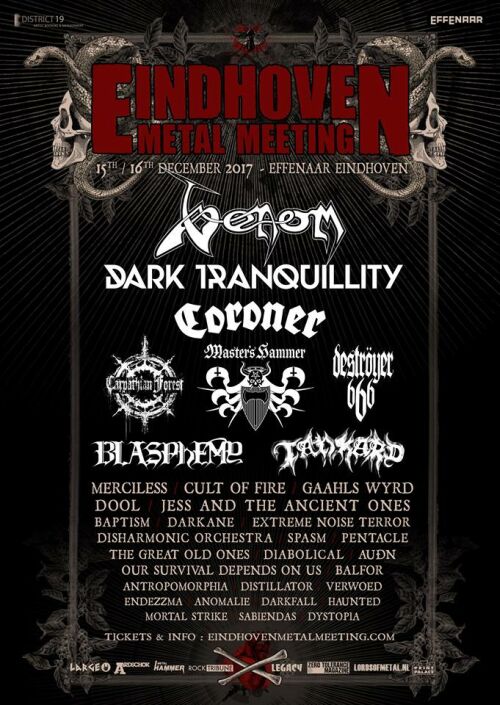 The line-up in alphabetical order is as follows:

Regular combi-tickets (€90 + handling fee) are still available on the official festival website. Day-tickets and the schedule will be made available later on. For tickets & the latest information about EMM, visit http://www.eindhovenmetalmeeting.com

For those hungry for more metal, there are Warm-up show and after-party with live music. 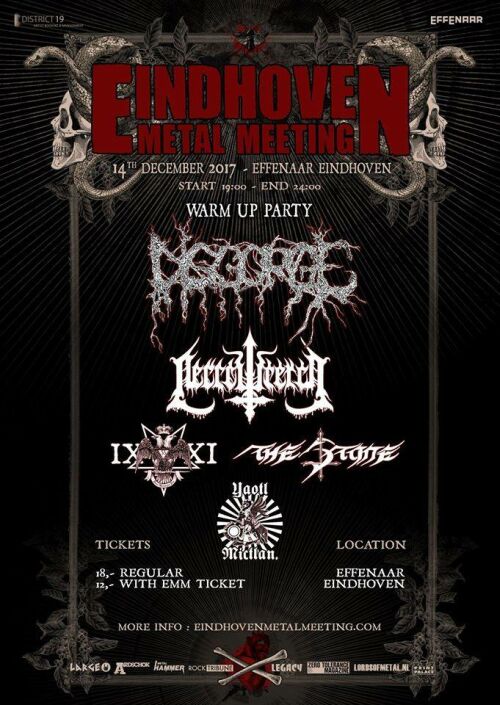 Eindhoven Metal Meeting Warm-Up Party is set for Thursday 14th of December 2017 at Effenaar with participation of DISGORGE (MX), NECROWRETCH, IXXI, THE STONE and Yaotl Mictlan. The tickets price for it is €18 (excl. servicecosts) as EMM ticket holders (day or combi) can take their tickets at the door and will receive a €6 discount! Otherwise, tickets for the Warm-up can be found at: hyperurl.co/EMMWarmUpParty

If you still want more metal, no problem – the EMM after-party will offer it right after the festival with the GOREFEST cover band GOREFUNEST and CARNATION playing live at the cult club Dynamo.

Metalheads from all over the world, see you at EMM 17!

November 9, 2017 is the release date of “World Requiem” – brand new album of Bulgarian Melodic Death/Doom Metal band DARK INCOGNITO. The CD will be released by Mediaplan Group, it’s contains 12 songs and is available for pre-order on shop.mediaplan-group.com or sales@mediaplan-group.com

Sylhet, Bangladesh based Thrashers H2SO4 unleashed their debut EP “British Bangla Testament”, where they have been very vocal about the miserable incidents that occurred during the British rule in Indian subcontinent.

Comment from the band: “EP – “British Bangla Testament” is lyrically based on British rule over Indian subcontinent and the tragic incidents that took place in between 1905 and 1947, including the forgotten holocaust of Bengal and the colonial depredation that enormously shaped our provinces. Composition wise, the music is having heavy, aggressive and shreddy elements, but we tried to emulate the agony and severe misery of millions throughout our tracks.”

Hailing from Sylhet, H2SO4 was formed in 2011 by Shuvo (vocals/guitar) and Rahul (lead guitarist/backing vocals). Originally kicking their journey off as a Heavy Metal band, the band later changed their musical direction to more shreddy solo oriented Thrash Metal sound.

Shortly after their formation, they frequently started appearing in numerous local gigs, and played a major role to enrich the then infertile metal scene of Sylhet and its nearest districts. Their track “Shorod Bihar” was released in a local compilation album Tyrant Shall Fall back in 2015.

Their debut EP “British Bangla Testament” focuses on the tragic incidents that took place in between 1905 to 1947, a period during the rule by the British Crown in the Indian subcontinent. While the major part of the influences rooted in Bay Area Thrash Metal masters, H2SO4 has not stayed away from infusing elements from neoclassical, Prog, traditional Heavy and even technical Death Metal.

An EP launching gig took place on October 21, 2017 with the supporting live performances from other local acts. The EP was started to get distributed digitally and worldwide from Oct 28, 2017.

Metalmania, the biggest indoor Metal festival in Eastern Europe returns to Spodek Hall (Katowice, Poland) on 7th April 2018. The 24th edition of this iconic festival will be headlined by EMPEROR! ASPHYX and ALASTOR have just been added to the lineup. Special guest of the festival: Christophe Szpajdel – Lord Of The Logos.

ASPHYX is a legendary Dutch Death Metal band formed in Overijssel, Netherlands in 1987. The band made their official debut in 1991 with the album “The Rack”. In 2000 the group disbanded for 7 years. In 2016 the band released their 9th studio album, “Incoming Death,” which is the essence of the ruthless brutal style of the band. 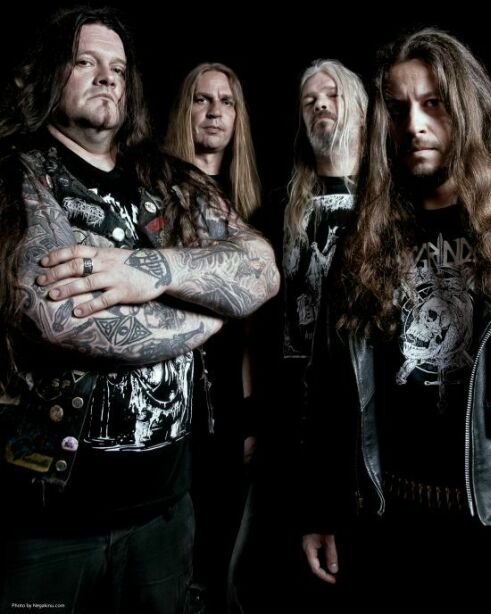 ALASTOR is a Thrash Metal band formed in 1986 in Kutno, Poland. The band has an established position on the Polish metal scene – their previous studio albums were appreciated by fans and critics alike. “Out of Anger” released in 2012 is the band most recent album. 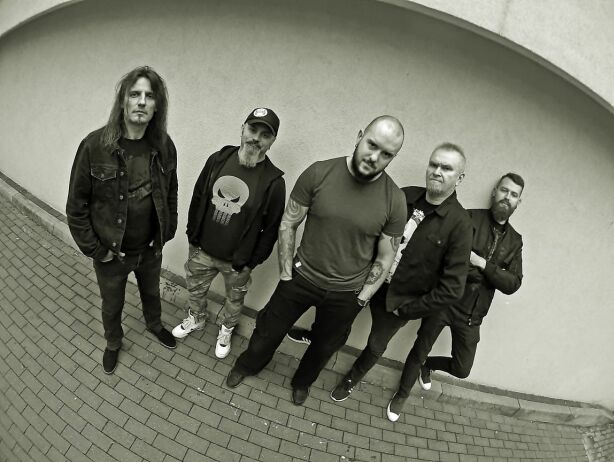 Christophe Szpajdel (Lord of the Logos) is a logo artist working with extreme metal bands. His passion for band’s logos soon became his vocation, specializing from the very beginning in pencil topped by ink. His international career was started in early 90s with a logo designed for the Norwegian band EMPEROR. His works include projects for BORKNAGAR, OLD MAN’S CHILD, ENTHRONED, MOONSPELL, ABORTED or ABIGAIL WILLIAMS. During the Polish exhibition at Metalmania Festival, Spiegel will present his well-known works, as well as those less popular. Fans of his art will have the opportunity to meet the artist in person.

Christophe Szpajdel (Lord of the Logos)

Metalmania Festival, one of the most important musical events of 2018, a real treat for metal maniacs! One day, two stages, several bands from all around the world and thousands of fans! That’s what Metalmania Festival is all about!

The last edition of Metalmania Festival took place at Spodek Hall in Katowice on April, 22nd 2017, with SAMAEL, CORONER, MOONSPELL and SODOM on the bill! Tickets are on sale now: www.ticketpro.pl, www.eventim.pl, www.ebilet.pl, www.biletin.pl, www.ticketportal.pl.