Nestled within the looming embrace of seven mountains, the rugged, rain-swept coastline of Bjoergvin has spawned many extreme bands and musicians over the years, but none quite as iconic as TAAKE and its formidable founder Hoest, who is now back with a seventh full-length album. Titled “Kong Vinter” (King Winter), the album is set for release on Dark Essence Records on the 24th November in Digipak CD, Digital and Vinyl formats, with the Vinyl available in black, transparent and white versions. All are double, 180 gram LPs in a gatefold cover. Transparent and white are limited to 1000 each.

Over the years Hoest has steered his creation with unerring accuracy through the mire of Black Metal. He has avoided the pitfalls of either stagnation or over-experimentation, and remained true to the spirit of the traditional Black Metal genre, whilst at the same time breathing fresh life into it. 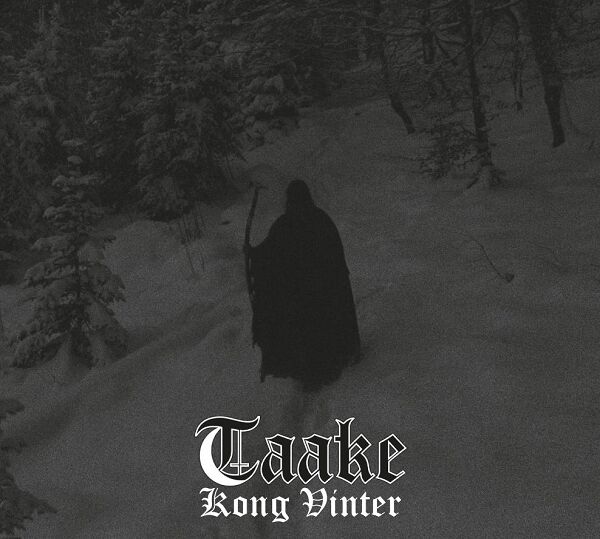 True to form Hoest has spent three years working on “Kong Vinter”, ensuring that the album is imbued with the unique Taake sound, whilst at the same time taking it even further. It is deceptively familiar to the ear, yet it is unpredictable as it winds its way sinuously through a soundscape that only a mother could love. A soundscape underscored by a nasty groove, that at times can seem devilishly playful.

The result is an album that is both progressive and straight forward, with a touch of the devil’s own music – Rock’n’Roll, making it unmistakably TAAKE. It is, in fact, an illustration as to why, for over two decades, Hoest has succeeded in remaining relevant and at the forefront of the genre.

“Kong Vinter”, on which Hoest plays all the instruments himself, was recorded and produced by Bjornar Nilsen (VULTURE INDUSTRIES) at his Conclave and Earshot Studios in Bergen. With a running time of 55 minutes and album artwork by Tom Korsvold of Coverart, track listing is as follows:

To celebrate the release of their sophomore full-length album “Mausoleum”, Norwegian Metallers DEVAR are streaming the album in its entirety.

Formed in 2002 by Devar, it was originally intended that the band should be a solo project, but, recognising the limitations that this imposed on his vision, the frontman decided to put together a full lineup that today consists of Devar on vocals, Obdsaija on drums and percussion, Aadland on guitars, and Ottoegil on bass and keys. It is with this lineup that DEVAR has developed and grown into a much more reflective band, with a stronger focus on the more varied and progressive aspects of their music.

“Mausoleum” itself is the perfect demonstration of DEVAR‘s unconventional approach to music, drawing its influences not only from the Extreme and Black Metal genres, but also from Avant-garde Metal and 70’s Prog. Matched with a lyrical concept that takes listeners on a journey down the paths of fear, insanity, darkness and death in order to explore the decline of man, the resultant sound is one that is both original and unique.

“Mausoleum” hits the streets on the 29th September on Gymnocal Industries in Digipak CD, Gatefold DLP and Digital formats. Artwork is by Tom Korsvold, photography is by Ronny A. Sangolt and tracklisting is as follows: